His deployable barricade protects teammates and locks down routes - perfect for controlling the flow of a match.

Uses his deployable barricade to provide cover for teammates, denying approaches to the enemy. His SMG has a low rate of fire, but does high damage and is effective at medium ranges. Turtle is very useful on defense, but also great at covering objectives so that teammates (or himself) can Build, Repair or Hack them.

After losing his arm in the battlefield and developing an addiction to painkillers most people would be down on their luck. This Turkish combat engineer, however, rebuilt his from scratch and is now looking for a second chance on the streets of London, one hearing about a lucrative dispute between Jackal and the CDA from his old 'friend' Phoenix. [1]

Turtle has the ability to deploy cover for himself and his allies, which allows teammates to shoot through while blocking incoming enemy fire. Turtle first deploys his generator, which then expands out to the sides. All players can walk through the shield and generator components. The shield will absorb up to 500 damage before breaking. However, the generator only has 120 health. Should either component of the shield sustain a damage threshold above this amount, the shield will break. The shield is the height of a merc.

The generator can only be shot from one side of the shield, the side that Turtle deploys it from. The shield will absorb damage from either side.

The deployable cover has a 35 second cooldown.

Two augments available to Turtle that directly affect his shield are Steady and Extender. Steady will increase the health of the shield and generator portions by 21%, to 605 and 145 respectively. Extender will increase the shield's width by twenty percent, making it cover a larger area on the battlefield. No loadouts have both augments on them.

None. Turtle was released after First Edition Loadouts. 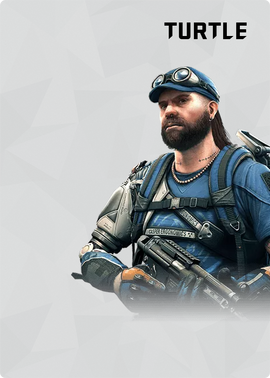 Upon selection in full profile:

Upon killing an enemy:

Upon using a mounted MG:

When use the "Stop firing" command:

When placing down shield:

Killing an enemy with a melee weapon: