His healing wave reinvigorates team-mates within range, while his unique ability to revive himself when incapacitated gives him a much needed second-wind. 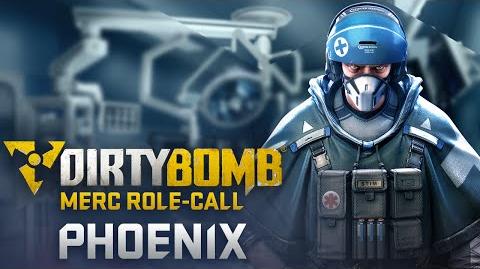 The Spanish medical community banished Phoenix for his unorthodox methods, ruinous malpractice settlements, and for generally being a superior asshole. But this disgraced former cosmetic surgeon has risen again. His experimental nanite facial rejuvenation serum has proved to be remarkably and unexpectedly effective at returning battlefield casualties to life. And now that Turtle has crafted him a replacement leg, Phoenix can admit that no matter how disappointed he was with that calf tattoo, he shouldn't have tried to remove it himself. Now that Phoenix is making his name as a much-sought-after battlefield medic, he's showing those Madrid Medical Council suits he was right all along. They're just glad he's killing people on the battlefield rather than in surgery.

Phoenix is a highly effective combat medic, able to heal and revive his teammates even in the thick of combat. He can also self-revive, bringing himself back into the fight without assistance from other Mercs. Even when he's down, he's not out.

Phoenix emits a wave of nanites that instantly heals teammates, the heal amount increases based on how long Phoenix charges his Healing Pulse.

Phoenix can revive incapacitated team-mates using his Defibs. The longer these are charged before releasing, the more health the players has when they are revived. They can also be used as melee weapons, dealing more damage the longer they are charged (max of 100 damage). The defibs' damage are effected by the Chopper perk as the max damage is increased to 120 (Chopper increases damage by 20%).

As his name entails, Phoenix can revive himself without the help of his teammates. The time it takes for him to Self Revive is the same amount of time it takes for a teammate to help you up. The cooldown on this ability is 25 seconds.

Upon selection in full profile:

After killing or finishing an enemy with a melee

Upon reviving a friendly player:

Upon using a mounted MG:

After healing a teammate with the healing pulse:

Upon reviving himself (tertiary):