Edit
This page could use a medic.
This article is a stub. You can help Dirty Bomb Wiki by expanding it.

Hunter is the 23rd merc in Dirty Bomb, and was released February 27th, 2018 alongside the Hunter Update.

Hailing from the arctic climate of Alaska, Hunter’s a born survivor. Raised by his father; by the time he was six he was able to hunt, feed and clothe himself. After serving in the US Army, he returned to an empty home with one less arm, and a disdain for following orders.

Many Mercs claim their weapon is part of them, but in Hunter’s case; his prosthetic crossbow quite literally is. A long-range specialist, his spotting bolts allow him to track his prey before he lands the killing blow, whilst his EMP bolts disrupt enemy deployables allowing him to clear the field of any distractions. The only people who get close to Hunter are those he finishes with his Ulu.

Hunter thinks on his feet, perhaps that’s why he’s lived so long. He sizes up the situation, anticipates his opponents then does what needs to be done. [1]

Hunter is equipped with a fast firing, highly advanced crossbow integrated into his right arm. The Crossbow is a high-powered projectile-based weapon, which is capable of firing two different bolt types ("Standard Bolt" and "EMP Bolt"). It's Tactical Scope can be used to charge Standard Bolts, allowing them to project faster and deal more damage to enemies, dependent on the charge.

A crossbow bolt which deals damage and leaves a temporary smoke trail for 2s, letting Hunter and his team find and hunt down enemy mercs. The crossbow also has a tactical scope which when used charges-up the next bolt to deal more damage.

An electro magnetic pulse which on impact disables all nearby electronic devices.It can be fired over long distances to disable enemy deployables and defenses.

None. Hunter was released after First Edition Loadouts. 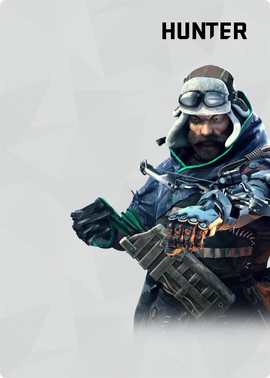 Upon being selected in the matchmaking session:

Hitting an enemy with crossbow:

Shooting an EMP Bolt under fire:

Shooting an EMP bolt with no enemy in-sight: